DNA profiles provide additional information about the genetic merit of a DNA tested animal and increase the accuracy of EPDs, which are called Genomic Enhanced EPD or GE-EPDs. In the IGS Single-step process, the DNA marker genotypes are directly incorporated into the genetic evaluation along with the phenotypes (performance data) and the pedigree. As a result, the DNA information has an impact not only on the genotyped individual but also on all the relatives of that genotyped individual. This allows for the DNA information to improve the accuracy of non-genotyped relatives. To measure the impact of DNA information on accuracies of GE-EPDs in the IGS Singlestep genetic evaluations, we compared the average BIF accuracies of GE-EPDs of DNA tested young animals (born in 2016 with no progeny) to the average BIF accuracies of nongenotyped sires born in 2010-2014. Only sires with non-genotyped calves were used for this comparison. We found that the average BIF accuracy of GE-EPD for a DNA tested young animal is equivalent to the average BIF accuracy of a non-genotyped sire with 21, 22 and 24 calves with observed phenotypes for birth, weaning and yearling weights, respectively (Figure 1, where a horizontal line cross a curve for a specific trait (e.g. red line and blue curve cross each other at the data point correspond to y(accuracy)=0.46) and x(progeny)=21 for birth weight)). The progeny equivalent (PE) for direct calving ease was 15 and it was only 3 for total maternal calving ease due to limited genotypes on cows. The PE for milk and stayability were 18 and 25, respectively (Figure 1). 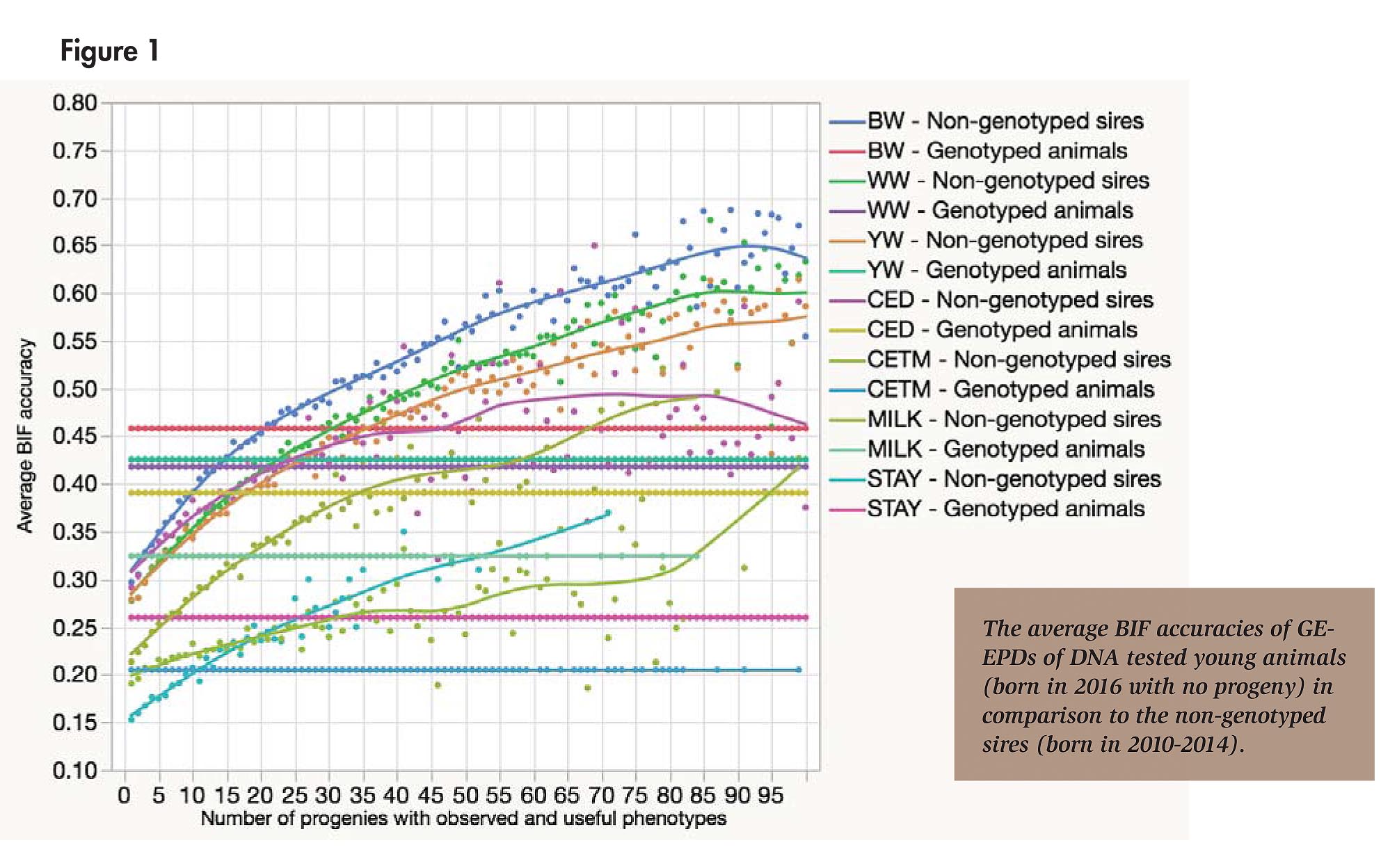 The Multi-breed Evaluation powered by BOLT is a breakthrough in GE-EPD accuracy improvement. Enabling technologies such as BOLT software will allow for even faster genetic progress with more accurate EPDs earlier in an animal’s life. We (IGS) are dedicated to using the best available technology to deliver more accurate GE-EPDs to our members so they have the best tools available for their selection decisions.

More in this category: « Multi-breed Stayability: First EPDs Using BOLT What to Expect with Multi-breed Genetic Evaluation Powered by BOLT »
back to top